A Tostitos Bag to Tell You if You Have Been Drinking

The Super Bowl is an American (and worldwide ) tradition which draws more than 100 million viewers every year and is such a big event that one company has even decided to give its employees the day after the game off. This annual tradition began way back in 1967 when the very first Super Bowl was held in Los Angeles, California. The Kansas City Chiefs and the Green Bay Packers competed for the inaugural championship title, with the Packers emerging victorious. 51 years later, the tradition of having the best teams in the country go head to head still continues. This year the New England Patriots are taking on the Atlanta Falcons.

Many people enjoy alcoholic beverages while watching the big game and, unfortunately, a number of these individuals decide to get behind the wheel after having just one too many. A 2014 Los Angeles Times article reported that, at least in California, there is a "77% increase in alcohol-related crashes causing injury or death on Super Bowl Sunday." In order to catch drivers who may be under the influence, police departments across the country have announced they will have increased patrols and set up DUI checkpoints for the Super Bowl weekend.

The newest addition.....  A bag of chips to tell you if you have been drinking....

One company has announced its intention to help curb the amount of drinking and driving that takes place on Super Bowl Sunday. Frito-Lay partnered with Goodby Silverstein & Partners to create a special Tostitos bag that can tell when an individual has been drinking. It can't tell how much a person has had like a Breathalyzer, but it does come "equipped with a sensor connected to a microcontroller calibrated to detect small traces of alcohol on a person's breath." If an individual has been drinking, the sensor in the bag will turn red and form "the image of a steering wheel, along with an Uber code and a “Don't drink and drive” message." The bag is so high tech that it "uses near-field communication (NFC) technology, allowing fans to tap the bag with their phone to call a ride." People can even get a $10 discount if they choose to call an Uber during or after the game. 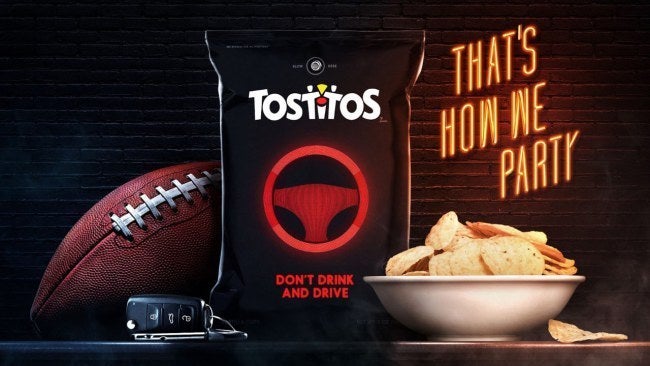 The bag may be a gimmick but Frito-Lay is really hoping that it does some good. The company's chief marketing officer, Jennifer Saenz stated, "Our goal is to remove 25,000 cars from the roads that Sunday evening." The creative director for Goodby Silverstein & Partners stated that "For a football fan, there is a lot of emotion involved with a game. It's easy to drink more than you planned. And a lot of times all you need to stop short of driving after drinking is a friend who calls you off. On Sunday of the big game, we want Tostitos to be that friend."

It remains to be seen whether this bag will meet the goals set forth by its creators. Whatever its usefulness, it is a novelty item that may be fun for people to check out during the game. However, when it comes to the decision whether or not to drive, the Lawrence, Kansas police department probably had the best advice, stating on Twitter, "If you have to blow into a Tostitos bag to know if you're intoxicated, for the love of all that is holy, DO NOT DRIVE."

Technology surrounding alcohol detection is constantly evolving.  This creative marketing by Fritos-Lay on a day many people enjoying consuming alcohol is quite unique and a first.  Most importantly, if you decide to have alcohol, have a designated driver.  Washington State has some of the toughest DUI laws in the country.  If you or someone you know have the misfortune of being arrested for DUI, they can contact me directly at 425-284-2000 or online.

A former DUI prosecutor, Aaron Wolff has over 18 years of experience in representing people accused of DUI and is recognized as one of the leading defense lawyers in Washington State. His relentless and passionate advocacy has lead to superb ratings and outstanding reviews from former clients.