If you've been arrested for suspicion of a Kirkland DUI, you will usually be transported to the Kirkland Police Department for a breath test.

If the officer believes a person might be impaired by drugs (a Drug DUI) or if there is an accident, a driver is usually taken to Evergreen Hospital for a blood draw.

If you're arrested by a Kirkland police officer in city limits, your case will be filed in the Kirkland Municipal Court

NOTE: Arrests made by troopers of the Washington State Patrol will be filed in the King County District Court. It is important to confirm the arresting officer was with the Kirkland Police Department as many troopers make arrests in downtown or on Interstate 405 and administer the breath test at the Kirkland Police Department BAC room. The way to confirm it was a Kirkland officer who made the DUI arrest is by looking at the bottom of the ticket where they write their name and arresting agency.

The Kirkland Municipal Court is located at 11740 NE 118th Street in Kirkland. This new courthouse opened in the summer of 2014 and houses the Court, Police Department and the Jail.  Information about the Court can be found on the City's website KMC Home. The Kirkland Municipal Court hears cases for several municipalities including Medina, Hunts Point, Yarrow Bay and Clyde Hill.

The presiding judge of the Kirkland Municipal Court is the Honorable John Olson, who formerly served as a police officer, prosecutor and defense attorney prior to taking the bench.  The Commissioner also regularly presides over Kirkland DUI cases.

If you're arrested for a Kirkland DUI, you are usually released after a breath or blood test. The criminal charge for a Kirkland DUI is typically filed via investigation within a few months by the Kirkland Prosecutor's office.

The City of Kirkland does not have its own prosecutor on staff. Instead, the City contracts with the private law firm of Moberly & Roberts to perform its prosecutor duties. There are several attorneys who represent the City in a Kirkland DUI case. The first appearance (also known as an arraignment) is always held on Tuesday mornings and begins at 8:45am

For more statistics relating to Kirkland DUI cases, go to the Washington Courts website.  Similar to state-wide trends, there has been a dramatic decrease of Kirkland DUI charges over the past several years. 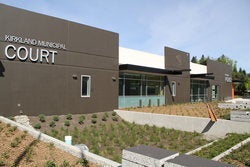 The Kirkland Justice Center which houses the Court, Police Department and Jail

There are five stages to the court process for a DUI case: Arraignment, Pre-Trial Conference, Motions, Readiness Hearing and, in a small percentage of DUI cases, Trial. Below is a brief overview of each step:

After waiting a few weeks to a few months, the Kirkland Prosecutor's office will file a criminal charge in the Kirkland Municipal Court. The court will send out a summons to appear for an arraignment. Kirkland DUI arraignments are always on Tuesday mornings.

The purpose of this hearing is for the accused to enter a plea.

NOTE: Always enter a plea of “Not Guilty.”

The Judge will decide on what types of "conditions of release" to impose. Standard conditions include abstinence from alcohol/non-prescribed drugs, law-abiding behavior, and no driving without a license and insurance.

NOTE: If you have a prior offense(s), the prosecutor commonly requests the court impose bail or an ignition interlock device. In addition, it is common for the prosecutor to request you to wear a SCRAM (Secure Continuous Remote Alcohol Monitoring) device. This is an ankle bracelet that detects alcohol through a person's perspiration. Not only is it very cumbersome, but it is quite expensive.

This is where negotiations occur between the prosecutor and defense lawyer. These always occur on either a Monday or Wednesday morning at 8:45 or 9:45am.  If a favorable resolution has been reached, you can enter a plea to a reduced charge. Alternatively, a request to continue the hearing to come back a month later could be made if negotiations are not complete and further investigation is required. Or finally, if after a few pre-trials a favorable resolution cannot be reached, the case could be set for motions and trial.

This is the first court appearance where the arresting officer will be present. A few common motions are whether there was probable cause to stop/detain/arrest, the admissibility of field tests, any custodial statements, and whether the breath or blood test was administered according to statute and protocol.

After hearing testimony and argument, the judge will then rule in regards to all of the defense attorney's motions to suppress and/or dismiss the case. While it is not common for a judge to outright dismiss a case, it is of great benefit to negotiations if key evidence is suppressed, weakening the City's case.

The Jury Call is the last hearing before trial, where the prosecutor and defense lawyer attempt to negotiate a resolution of the case. These occurs on the second Wednesday of each month at 8:45am.  If a deal can be struck, you can enter a plea. Alternatively, the parties would confirm whether they are ready to proceed to trial the following week.

A DUI trial could last anywhere from a day and a half to an entire week. The length of the trial is dependent on the number of witnesses for each side.

The City will always have the arresting officer(s) as witnesses. In addition, if there is a breath test then the City will also call a toxicologist from the Washington State Toxicology Laboratory (WSTL) and a BAC technician from the State Patrol to lay the foundation for the test to become evidence for the jury to consider.

The Kirkland Municipal Court devotes one week a month for jury trials to occur.

You need to immediately speak with an experienced attorney after your DUI arrest.

I have appeared frequently in Kirkland Municipal Court and formerly served as the City of Kirkland prosecutor and prosecuted hundreds of DUI cases.